MythTV is a GPL open source application for Linux designed to allow any computer (that meets the specified minimum
requirements) to function as a personal video recorder. I sent some patches about UPnP extentions to the project term based on MediaGateForCC from 2004. 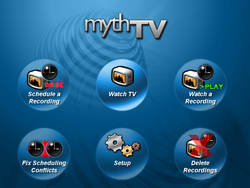 MythTV supported UPnP/AV media server based on MediaGateForCC from the release.

According to the release note, their term want to rewrite the media server codes based on other GPL licenced because their licence is GPL v2. However, I have no plan to release the source codes as GPL licence now 🙁