The above picture shows that I worked on Intel NUC8i5BEK with a wireless Logitech K380 keyboard and Logitech M350 mouse at my local McDonald’s Shop. Recently, some McDonald’s shops offer power connector seats in Japan.

I have been used a late 2010 MacBook Air as my primary portable computer, but Apple decided to discontinue the support from macOS Majave this year. Therefore, I had to buy a new notebook computer, but I thought that these performances, such as CPU and memory, were not worth the price.

In the meantime, I noticed that my local libraries and shops I visit offer power outlets. Besides, I already have the portable display, I/O DATA LCD-MF161XP, which supports USB Type-C and HDMI port, to maintenance my home servers. Therefore, I choose to buy the micro-computer because it is a reasonable cost performance and has high extensibility for memory and storage. 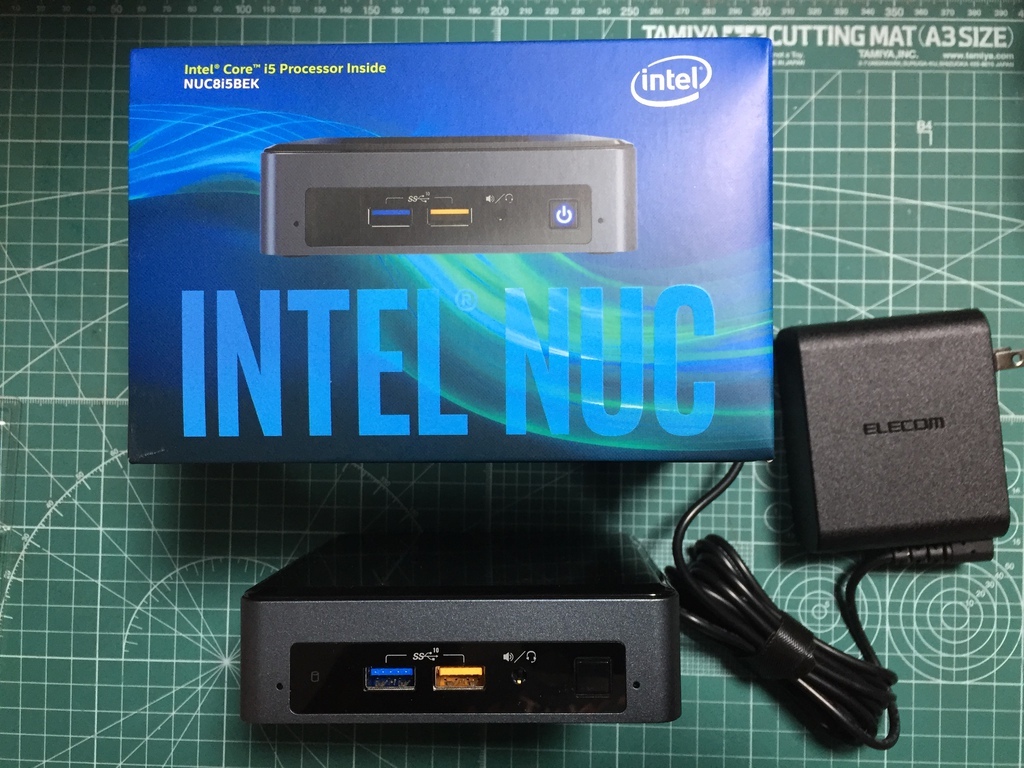 Finally, I bought an Intel NUC8i5BEK with a 512GB SSD storage and 32GB (16GB x 2) memory modules. I knew that the standard power supply is big, and so I bought a more compact power supply, ELECOM ACDC-1965TOBK, as the portable power supply too. The following picture shows these parts. 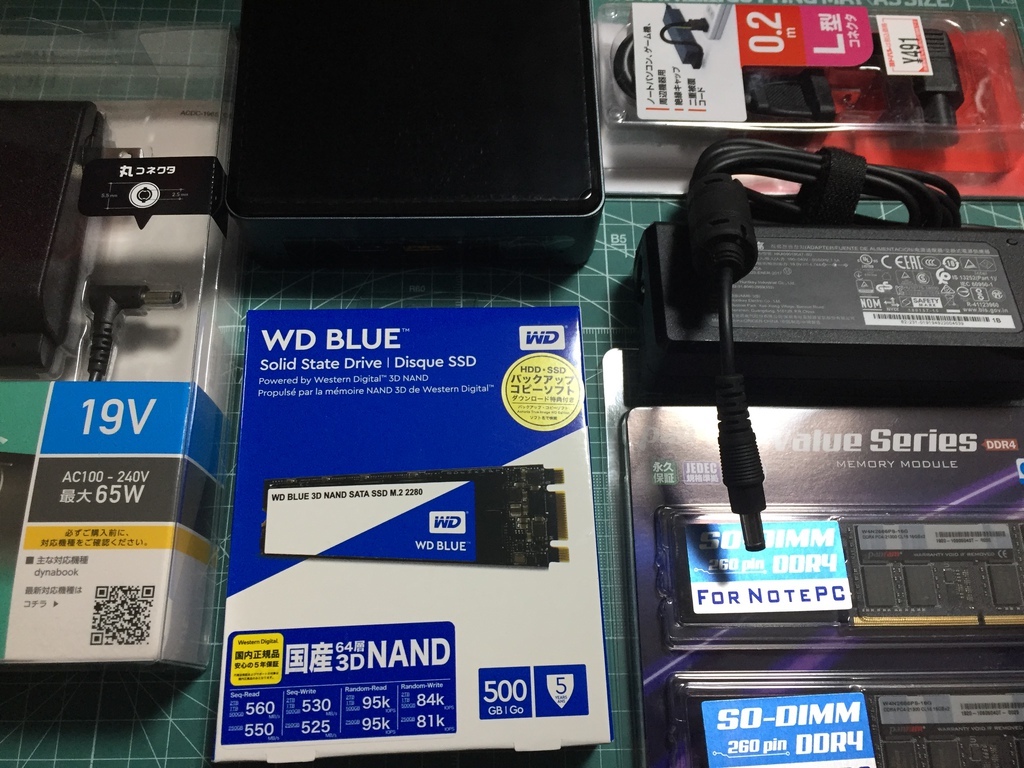 I feel that modern notebooks such as Mackbook Pro are expensive for these performances, but I could purchase the micro-computer set (Core i5-8259U, 512GB storage, and 32GB memory) under $700.

I have been using other INTEL NUCs, NUC5i5RYK, as home servers and temporary development machines, and I was pleased with the low power consumption and performance. However, the TDP (Thermal Design Power) of Intel NUC8i5BEK increased from 15W TDP to 28W compared to NUC5i5RYK. 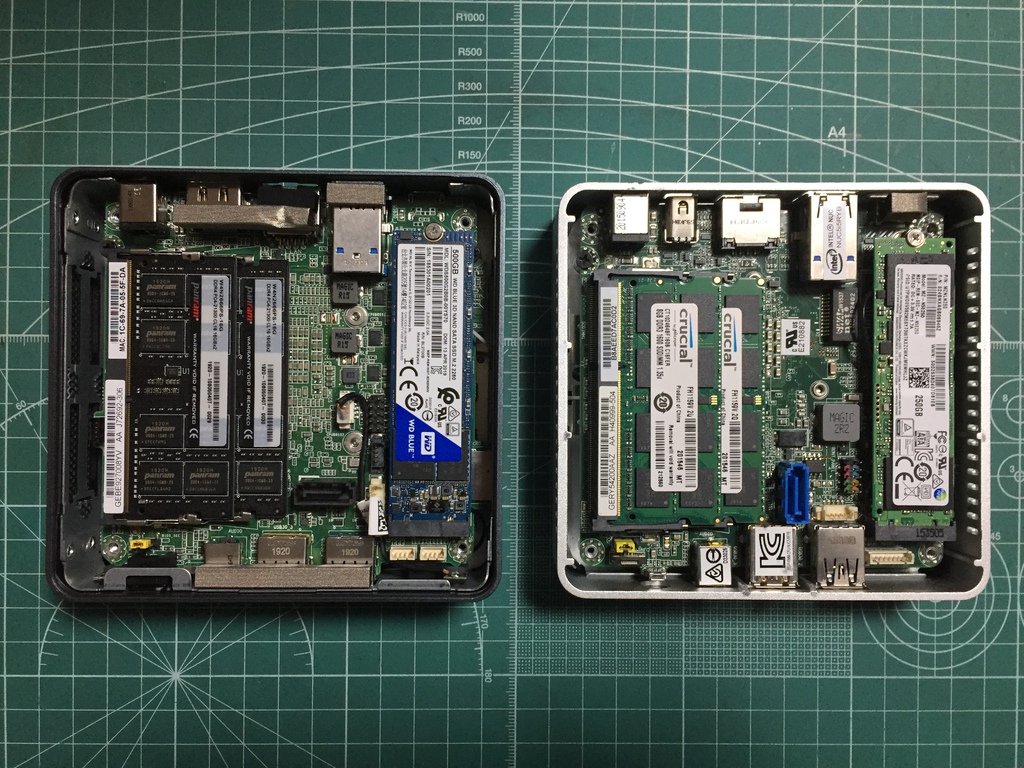 I thought that the power consumption worsened is not so good for my home server purpose, but I was interested in improving the performance for my desktop purpose.

About the front panels, each computer has two USB ports, and there is no difference except the location of the power button. However, Intel NUC8i5BEK upgrade to have a USB-C and full HDMI port compared with NUC5i5RYK on the rear panel. 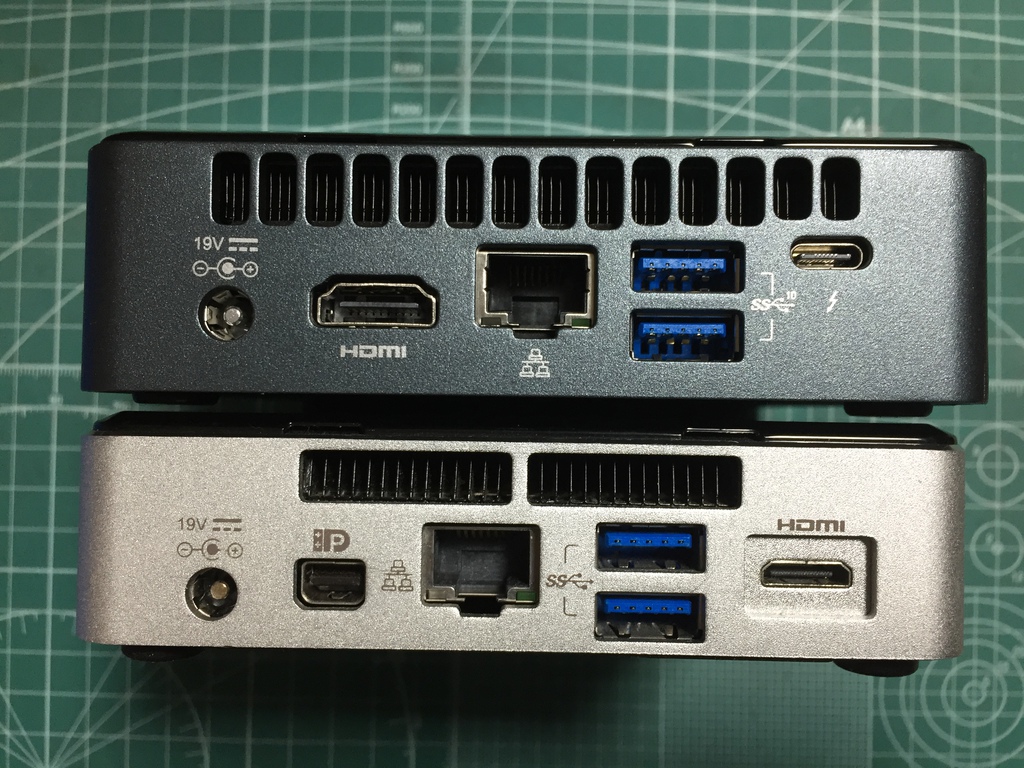 NUC5i5RYK have only a legacy mini HDMI and mini display port, and these port can not output to 4K display monitor directly. Therefore, I have to prepare another display adaptor such as MCO DPA-4KHD01 to output 4K display monitor.

I brought the two micro-computers with a portable display monitor, I/O DATA LCD-MF161XP, to a neighborhood library for benchmarking the performance and power consumption in my typical application usages. 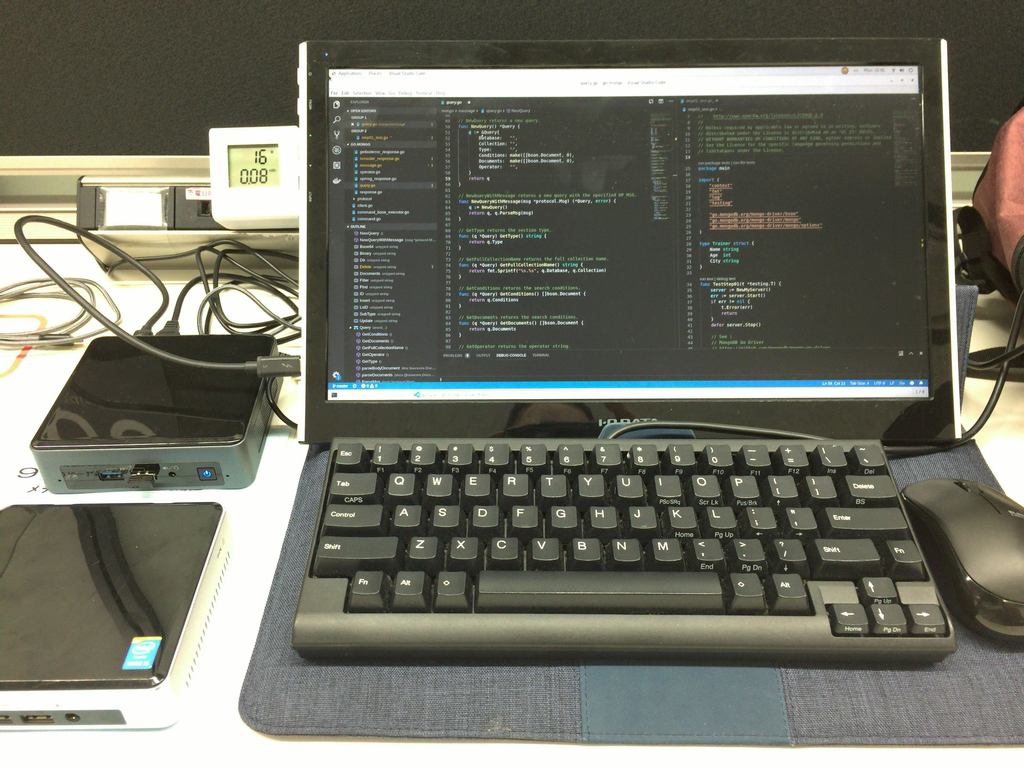 The above picture shows that I worked on Intel NUC8i5BEK with a wired PFU Happy Hacking Keyboard and wireless ELECOM TK-FDM078M mouse at my local public library. In Japan, some public libraries offer public rooms which the visitor can use any computer to study.

In my application usages, I confirmed that the power consumption of Intel NUC8i5BEK under about 40W including the portable display which assumes about 6W. Therefore, I recently use other more small power supply, ELECOM ACDC-1965TOBK, instead of the original big power supply.

In the past, the combination of Macbook Air, iPhone, and HyperJuice2 had been improved my mobile development environment dramatically. However, recent major Japanese shops offer power supplies and WiFi connections. Therefore, I think that it makes sense to use the micro-computer as a portable computer instead of standard notebook computers.