uEcho for Go is a portable and cross platform development framework for creating controller applications and devices of ECHONET Lite for Go developers. ECHONET is an open standard specification for IoT devices in Japan, it specifies more than 100 IoT devices such as crime prevention sensor, air conditioner and refrigerator.

The uEcho for Go supports to control devices of ECHONET Lite or create the standard devices of the specification easily. The uecho-go is designed in object-oriented programming, and the functions are object-oriented in their naming convention, and are grouped into classes such as Controller, Node, Class and Object. 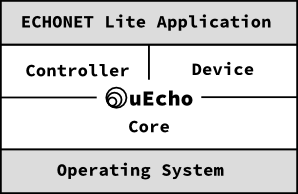 To implement IoT controller or devices of ECHONET Lite, the developer had to understand and implement the communication middleware specification such as the message format and base sequences.

The uEcho for Go is inspired by reactive programming too. Using The uEcho for Go, developer have only to set basic listeners to implement the devices and controllers because uEcho handles other requests such as request and notification requests automatically.

Please check the following official site to know about the uEcho in more detail.